Neither Myk Habets nor myself created the terminology of evangelical Calvinist, as far as I know it was coined by Thomas F. Torrance; at least in the sense that we understand and articulate it. Some people wonder why we 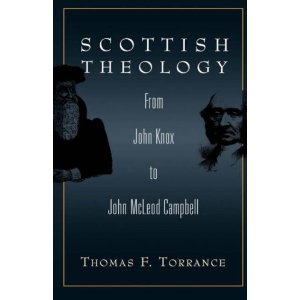 would weight ourselves down with such politically charged rhetoric; both ‘Evangelical’ and ‘Calvinist’ have accrued such ominous connotations, culturally, that it might seem an unnecessary trifle to burden ourselves with. But Myk and I understand that the origin of our trajectory is indeed rooted from within the Calvinist tradition (i.e. in contrast to the Lutheran one), and so as deleterious as it might seem to some, this is the label we have identified with. ‘Evangelical’, today, stands for a particular movement, in particular among American Christianity, but is not how we use it; we use it to modify Calvinist in a way that summons are belief in God as Triune love who gave Himself for all humanity in Jesus Christ. And so we see it as an adjective that modifies our style of Calvinism, one that is decidedly different from the kind of Calvinism that is usually thought of today when someone hears the verbiage of ‘Calvinism’—so our self understanding of Calvinism is not one of a simple addition of Evangelical + Calvinist; no it reaches back into a Scottish development, which primarily finds much of its voice (for Myk and myself) sounded off by TF Torrance. In order to substantiate that neither Myk nor myself invented this designation of evangelical Calvinist, let me quote Torrance in a passage from his book Scottish Theology where he uses it to describe some Scottish Calvinists (in this context Robert Leighton, an Episcopelian Calvinist) of the seventeenth century; he writes:

[…] Leighton was certainly a Calvinist, but a mild Calvinist horrified at the obsessive attention given to predestination as a test of orthodoxy, and at the substitution in the pulpit of doctrinal diatribes for biblical exposition and the preaching of the Gospel. He was an evangelical Calvinist of whom John McLeod Campbell once said in a letter to his father, ‘I love the writings of Leighton, because they breathe so much of the spirit of an evangelist’. Leighton himself preached to his congregation in direct personal terms about repentance and conversion, and spoke of the lively belief to which he called his people as ‘experimental knowledge of God, and of his son Jesus Christ’. This was  a way of believing and knowing God with an ‘inward affection towards Christ’.

The intellective knowledge of Christ, the distinct understanding, yea, the orthodox preaching of the Gospel, the maintaining of is public cause, and suffering for it, shall not then be found sufficient. Only that peculiar apprehension of Christ, those constant flames of spiritual love, that even course of holy love walking in his light, shall be those characters, whereby Christ shall own his children, and admit them into the inheritance of perfect light.

Labour, then, for a more active and practical knowledge of God and Divine truths, such as may humble and renew your souls. [Thomas F. Torrance, Scottish Theology: From John Knox to John McLeod Campbell, 163.]

Ultimately the language of ‘Evangelical Calvinist’ is not consequential in the halls of heaven (the new Heaven and Earth), but in the present it helps identify the particular theological stream we associate with (Calvinism) and how we see that stream appropriated methodologically and doctrine of Godly (Evangelical/Triune). We didn’t make it up, Torrance did; others use this language today to identify conservative Calvinists, or other brands, but they do so in a way that simply presumes that Calvinism is monolithic (of the Westminster or 5 point Baptist sorts). We have shown up in these last days (;-) ) to let the world know that there is a better way forward. If you don’t like the terminology of Evangelical Calvinist, then discard it; I personally don’t feel slavishly bonded to it either, but I am not ashamed of it in the same breath.

Torrance continues to use the language of evangelical Calvinist, in his book, to describe Scottish Calvinist theologians like Leighton; Torrance is contrasting these evangelical Calvinists with the Federal/Westminster Calvinists of that day. Likewise, we follow in suit, and readily recognize that we are noticing (and participants in) a version of Calvinism that is unapologetically different than Westminster/Federal/5 point Calvinism of today. Nevertheless, given our commitment to the primacy of Christ and God’s unilateral giveness of His grace through the Spirit created humanity of Christ, and given our Christological commitments, etc., we are clearly within the fold of the Calvinist trajectory (esp. as Torrance constructively describes and prescribes it as he engages with voices from the Scottish past). We tap into the themes and impulses left by theologians like Calvin, Knox, the Erskines, John McLeod Campbell, Thomas Torrance, Karl Barth and many others who imbibe the Reformed heritage as their own.

I hope, at minimum, this post has shown you where Myk and I took the language of Evangelical Calvinist from, and why.