My friend, Jason Goroncy, contributed a chapter to the recently published edited volume Always Being Reformed: Challenges and Prospects for the Future of Reformed Theology edited by David H. Jensen. Jason’s chapter is titled Semeper Reformanda as a Confession of Crises (pp. 43–73).[1] I have only just started Jason’s chapter, but as he usually does on whatever loci he is 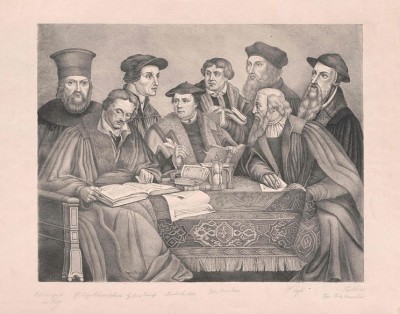 engaging with, he offers insightful analysis, in this instance, on the history of semper reformanda (‘always reforming’) as it served as posture and attitude within the early Reformed communions scattered throughout Western Europe. Of course, for our purposes, not only is the history and outworking of this important to get a grasp on, but more importantly its implications for us presently as Reformed Christians is just as important.

The concern that I have had, and we as evangelical Calvinists have had, is that certain Reformed Confessions (particularly nowadays, the Westminster Confession of Faith, or for some: the so called Three Forms of Unity [Belgic Confession of Faith, Canons of Dort, Heidelberg Catecheism]) have become magisterial for those who confess to be Reformed Christians. In other words, the semper reformanda isn’t really a reality, since the subordinate status of say the WCF, in a functional way, is no longer subordinate; instead it has become regulative in a hermeneutical way for many Reformed Christians. Jason helpfully notes how this has been a problem from the get go, starting with the Synod of Privas (1612). Note:

The spirit of the semper in the reformanda aphorisms was not always met with welcome, however, even among the Reformed. For instance, the Synod of Privas (1612)—called amid bitter political struggles, division among nobles and among churches, and the rise to power within the church of bureaucratic hardliners such as Daniel Chamier—witnessed the practical end to a commitment to confessional development on the basis that such would in fact promote further destabilization and challenge to those who found themselves empowered on the winning side of debates. Unlike, for example, the Scots Confession (1560) which made plain that any church confession was strictly subordinate to Holy Scripture—that “interpretation or opinion of any theologian, BCirk, or council” which is found to be “contrary to the plain Word of God” is to be corrected by such and that such was expected to be a continual process undertaken by a listening church whose fidelity was never to be directed to the Confession itself—the Confession which was the fruit of the Synod of Privas, and which all pastors—Huguenot and other—were required to sign, “effectively closed off the possibility of any further substantial change to the confession; hence, for all intents and purposes, it brought to an end the previous commitment to the concept of semper reformanda….”[2]

Goroncy goes on to quote Brian Armstrong who describes the historical circumstances and the effect that the Synod of Privas had on the Reformed churches of that time, and what it did to the idea of semper reformanda:

For the first fifty or more years the Huguenots considered it important to revise the confession in the light of other confessional positions and new insight into, and understanding of. Scriptural teaching. The hope was to forge an atmosphere of inclusiveness in the Reformed world. At the beginning of the seventeenth century, under the pressure of external threat to an established church and under the scholastic methodology and precision that emerged in the face of this new polemical orientation, there was a gradual but steady move to affirm that their confessional position was the only true and acceptable interpretation of God’s truth. So it became an atmosphere in which definitive charges of heresy could be made and applied.[3]

The intentions of the Huguenots were good, just as those who would require that the WCF be submitted to in the Reformed churches today. But a problem that emerges from a desire for “Reformed purity” is that the Confessions (whatever they are) lose their relative and subordinate status; instead they take on a dominant status, regulating how one reads Holy Scripture, and determining who’s in and who’s out. This dampens the ‘spirit’ of the Reformed concept of ‘always reforming’ and essentially establishes, ironically, a magisterium for the Reformed churches, even if that is denied.

To close, Jason, in his development, in this particular section of his chapter, offers a corrective word from Karl Barth on how the Word of God should be allowed, indeed, to be the reality that breaks into the walls of the church and keeps it within the good ‘spirit’ of the Reformed faith; the faith that is semper reformanda per the magisterium of the Word of God:

If the Reformed church is going to be the ‘always reforming’ church, then, as Goroncy alerts us to through Barth, we need to continuously be the ‘listening church’. The idea of the listening church presupposes that God has spoken (Deus dixit), and not only that, but that he continues to speak through his in-breaking Word; the Word that the Reformed churches are subordinate to, even in their confession making.

[1] ‘Semper Reformanda as a Confession of Crisis’, Pages 43–73 in Always Being Reformed: Challenges and Prospects for the Future of Reformed Theology. Edited by David H. Jensen. Eugene, OR: Pickwick Publications, 2016.

2 thoughts on “Have the Reformed churches Lost their Semper Reformanda ‘Always Reforming’?”

Hello my name is Bobby Grow, and I author this blog: Athanasian Reformed (formerly known as The Evangelical Calvinist). Feel free to peruse the posts, and comment at your leisure. I look forward to the exchange we might have here, and hope you are provoked to love Jesus even more as a result. Pax Christi!