Skip to content
HomeAn Ontological-Relational Framing of the Bondage of the Will: The Vicarious Humanity of Christ as Antidote

I am not a classical Calvinist; by now most of you know what I mean when I say that. I am not a classical Arminian; indeed, I’m not Arminian at all. I am Athanasian Reformed (aka Evangelical Calvinist). I affirm something like total depravity; I prefer to call that homo incurvatus in se, like Martin Luther did. Either way, I believe all of humanity, at 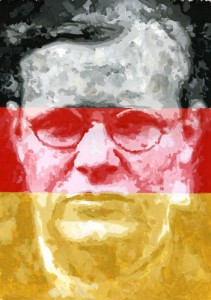 the fall, was plunged into a rupture with the triune God, such that humanity lost all capacity to be for or with God in any way. In other words, as some refer to this more popularly, in regard to salvific matters, I am a proponent of ‘total inability.’ This means that I reject the (‘Pelagian’) notion that humanity retains an abstract (from God) freewill that would allow humans, apart from a radical in-breaking of God’s Grace in Christ, to be for God and not fundamentally against Him. I maintain that all of humanity, along with Adam and Eve in the garden, fell into a ruptured relationship with the triune God, such that postlapsarian humanity inhabits a status that keeps them incurved upon themselves, motivated by a saucer of competing affections that never allows them to see God as anyone but themselves. One manifestation of this, among others, is that such humans will construct rationalist citadels of anthropological heft wherein their reason, incurved upon itself as it were, becomes the standard for all that is real (think cogito ergo sum, or tabula rasa).

In light of that you might think that I must, then, rely on some notion, in an ordo salutis (order of salvation), of God’s ‘regenerating grace’ (ie grace as a quality) entering into the ‘elects’’ heart in order for that particular person to come to have capacity to finally see[k] God for who He really is in Christ. But I don’t endorse the model of substance metaphysics that funds that sort of theory of anthrosalvation. Instead, as you also know of me by now, I think from the largely After Barth tradition. Within this tradition we have figures such as Thomas Torrance, Dietrich Bonhoeffer et al. For Barth and Torrance, in particular, they are both in-formed by Athanasian categories, in particular, and Patristic, in general; among other (modern) influences. Even so, they operate from a complex when it comes to the particular issue of thinking about the so-called Bondage of the Will; they both affirm it, but from within an ontological/filial frame. For them the issue of rupture between God and humanity isn’t primarily juridical, instead it’s a relational matter. For them, in the fall, humanity’s being has lost its human being in the sense that it has been spliced out of God’s image (imago Dei) in Christ (cf. Col. 1.15). Because of this plunge into ‘sub-humanity,’ humans no longer have the capacity to be free for God; since God alone is genuinely free. You see, for the tradition I think from (which is the biblical one), human being only has being and orientation, insofar as it is in right relationship with the triune God. Outwith this relationship the ‘abstract human’ has no capacity to operate with any notion of primal freedom; of the sort that God alone possesses. In order for that seemingly impossible possibility to become a possibility, for my tradition (which is the biblical one), it requires that God does something for us; viz. that He ‘disrupts’ the state of affairs an abstract humanity finds itself in, and from this act, humanity comes to have an objective ground to be towards God once again. Albeit, in the resurrection of Christ, this ground is now greater than the soil the first Adam provided for; in the resurrection of Christ humanity now has the fertile soil it requires to grow towards God from in and through the second and greater Adam’s vicarious humanity for the world.

Jens Zimmerman offers insight on how the aforementioned lineaments operate in the theology of Dietrich Bonhoeffer:

These differences notwithstanding, Bonhoeffer still shares with Heidegger the basic hermeneutic axiom that human knowledge consists in the interpretation of a reality in which one already moves, lives, and has one’s being. For Bonhoeffer as a Christian theologian, this reality is of course determined by Christ alone. Knowledge of one’s participation in this Christ-reality comes only by God’s grace as one is drawn into communion with the Trinity. Bonhoeffer’s solution to the mind-world dichotomy is thus very similar to Heidegger’s, albeit based on a specifically Christian ontology. Already in Act and Being, he develops the fundamentally hermeneutic concept that faith is not cognitive assent to doctrine, but ‘a mode of being’ (DBWE 2: 118). Believing in God is not merely a mental act but involves being drawn into a reality that is ‘prior to the act of faith’ (DBWE 2: 117). This ‘being-in-Christ’ is characterized by an intentionality directed purely to Christ (a fides directa or actus directus), so that the self is transformed by this reality. For Bonhoeffer ‘everything hinges on faith’s knowing itself not as somehow conditioning or even creating this being, but precisely as conditioned and created by it’ (DBWE 2: 118). Human reflection on this reality is a necessary, secondary interpretation of this existential reality. This kind of secondary reflection is called theology, ‘which is not existential knowledge’, but rather an interpretation of the church’s experience of God as crystallized and sedimented in tradition over time through preaching, creeds, and dogma. In this way, theology acts as the ‘preserving and ordering memory [Gedächtnis]’ of the living, ‘spoken word of Christ in the church’ (DBW 2: 131, …). Preaching draws on this memory of Christ’s presence and also shapes it at the same time.

Participating in this Christ-reality does not constitute some Hinterland or parallel universe allowing the Christian to escape from the world. Bonhoeffer states:

Like all of creation, the world has been created through Christ and has its existence only in Christ (John 1:10; Col. 1:16). To speak of the world without speaking of Christ is pure abstraction. The world stands in relationship to Christ whether the world knows it or not. (DBWE 6: 68)

Bonhoeffer is well known for his insistence that the Christian’s participation in the Christ-reality does not negate the world but rather founds proper human responsibility for the world. On account of God’s becoming human, God and humanity, and therefore God and world, must be thought together. Bonhoeffer avers that ‘where the worldly establishes itself as an autonomous sector, this denies the fact of the world’s being accepted in Christ, the grounding of the reality of the world in revelational reality, and thereby the validity of the gospel for the whole world’ (DBWE 6: 60). For Bonhoeffer, the incarnation itself—God’s transcendent truth entering into human history and temporality—sets the hermeneutical pattern for Christian knowledge, wherein the sacred is known only in the profane, the revelational in the rational, and the supernatural only in the natural (DBWE 6: 59). [1]

Maybe this is your first encounter with this sort of salvific conniving, but hopefully not your last. This is why as Athanasian Reformed types we say there is an historia salutis rather than an ordo salutis. The focus on salvation in this frame is on the pre-history (ad intra) and history (ad extra) of God’s life for us in Jesus Christ. We see His life as the Via by which all of humanity comes to have an objective ground as the pre-condition from whence they come to have the Spirit generated capacity to say Yes to God; that is from Christ’s Yes and Amened life for them in the resurrection humanity that ascended and is now seated at the Right Hand of the Father. This might raise some ‘causal’ questions for the Aristotelian-minded among us, that is in regard to how this avoids ‘universalism’ implications, and we have response for that. I have already addressed that more than once elsewhere here on the blog, and in our books. But to be sure, as an Evangelical Calvinist, I affirm humanity’s need for newly-created ground that we might come to genuinely think God from prior to our acknowledgement of God. As has been pressed throughout this post: I maintain, along with the biblical tradition I think from, that it is only in and from the elect and primordial humanity of Jesus Christ that humanity is raised up with His archetypal humanity, and it is from here, from this sacred space of liminal humanity for all, that sub-humanity can rise from the ashes of its desolate life and breathe from the lungs of Christ’s Yes for them coram Deo.

4 thoughts on “An Ontological-Relational Framing of the Bondage of the Will: The Vicarious Humanity of Christ as Antidote”