Skip to content
HomeWhy Did God Create Us: Jesus is the Answer, What’s the Question?

Just yesterday I was having a discussion with my wife and sister on Divine aseity. In the midst of that discussion my sister perceptively asked: ‘why did God create us to begin with?’ This is a good and basic question that most Christians gloss right past in the haste of their daily lives; but we shouldn’t! My on-the-fly response was that He created us because it is 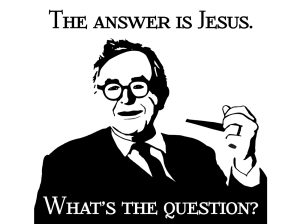 fitting with who He is as the relational God of Father, Son, and Holy Spirit. It is fitting that a God full of Grace would want to share His eternal fellowship with the ‘other,’ since indeed the ‘other-in-the-One’ is definitive of God’s very life by His natural status as the Monarxia. As it so happens, rather fortuitously, in my Church Dogmatics reading Barth hits upon this very question vis–à-vis his doctrine of election:

Augustine and his followers emphasised quite rightly that the man Jesus as such has nothing to bring before the electing God which would make Him worthy of divine election or make His election necessary. He is the Son of God only by the grace of God. That this is indeed the case may be proved conclusively by the absoluteness of the gratitude and obedience with which this man stands before God and submits Himself to Him. It is thus that the creature lives before God, its freedom consisting in the fact that in its autonomy it recognizes and acknowledges that it is wholly and utterly responsible to God. And so this man Jesus, as the object of the divine decree, is the beginning of all God’s ways and works, the first-born of all creation. In Him it comes to pass for the first time that God wills and posits another being different from Himself, His creature. Be it noted that this determination of the will of God, this content of predestination, is already grace, for God did not stand in need of any particular ways or works ad extra. He had no need of a creation. He might well have been satisfied with the inner glory of His threefold being. His freedom, and His love. That fact that He is not satisfied, but that His inner glory overflows and becomes outward, the fact that He wills the creation, and the man Jesus as the first-born of all creation, is grace, sovereign grace, a condescension inconceivably tender. But this determination of the will of God is eminently grace to the extent that in relation to this other, the creation of God, God’s first thought and decree consists in the fact that in His Son He makes the being of this other His own being, that He allows the Son of Man Jesus to be called and actually to be His own Son. In and with His lordship over this other, in and with the creaturely autonomy of this other—and even that is grace—God wills and decrees and posits in the beginning both His own fatherhood and also the sonship of the creature. This is more than mere kindness and condescension. It is self-giving. And that is how the inner glory of God overflows. From all eternity it purports and wills its own impartation to the creature, the closest possible union with it, a fellowship which is not to its own advantage but to that of the creature. It is in being gracious in this way that God sets forth His own glory. It is in the election of the man Jesus that His decision to be gracious is made. “God so loved the world, that he gave his only begotten Son” (Jn. 3.16). In a first and most important way we can now understand the extent to which, in the light of the election of the man Jesus, all election can be described only as free grace. The man Jesus is the elect of God. Those whom God elects He elects “in Him,” not merely “like Him,” but in His person, by His will, and by His election. Those who God elects, the One blessed of God elects also. What can this election be, then, but more grace, a participation in the grace of the One who elects, a participation in His creatureliness (which is already grace), and a participation in His sonship (which is eminently grace)? From its very source the election derives from the man Jesus. And as election by Him it is indirectly identical with that beginning willed and posited by the condescension and self-suffering of God. It is “the grace of our Lord Jesus Christ.”1

For Barth, as is typical, the answer is ‘Jesus’; no matter what the question is! The question of why God created us isn’t a worldview question according to Barth. Indeed, the question itself presupposes its own answer: God. But to leave the question to a generic God will never do, not for Barth, and not for me as a Christian. The question, for the Christian, must always be specified by its confrontational ground that comes for the Christian by encounter with their Lord; afresh and anew. The question of why God created us, for Barth, starts and begins with who God is in the election of the man, Jesus Christ. It is this election that is grounded in the who of God’s inner-life, that serves as the primordial beginning of what man/humanity is. Humanity, as understood from the election of Christ, is a creature intended to find its warp and woof in and from the bosom of the Father; indeed, as that is grounded in the burps and Holy babbling of the Son for us. This is why God created: because He freely chose to have fellowship with a creature who He first elected to be the Creature of God from within the very inner-life of God’s organic life of life as One-in-the-Other. God desired to include an-other in the resplendence of His eternal life as Father, Son, and Holy Spirit because God is overflowing Grace in His very life of superabundant love.

In order for the creature, us, to find such a response adequate, we must ‘seek first His kingdom and His righteousness; and all these other things will be added unto us.’ It isn’t curiosity that is determinative for the Christian imagination, it is God’s Self-determinative revelation for us in Jesus Christ that ought to shape any and all of our questions. If He is the Alpha and Omega of God for us, then insofar as we are circumscribed by His life for us in Jesus Christ, then Jesus must be the whence and wane of our lingering questions. It is as we ‘grow in the grace and knowledge of God in Christ,’ that our ‘telos’ as creatures before God, as creatures in the elected man of Jesus Christ, that we can begin to grow into the eternal life that God has adopted us into by the Grace of the Holy Spirit, who is Jesus Christ.

2 thoughts on “Why Did God Create Us: Jesus is the Answer, What’s the Question?”