I grew up Conservative Baptist (CBA), the son of a CBA pastor and church planter. We weren’t of the Reformed variety, neither were we of the Arminian type. We were what we liked to say Biblicists. In the main, this generally could identify most Baptists, or at least it did in the past. But of course, along this broad continuum there have indeed been, and are,

Reformed Baptists, Freewill Baptists, so on and so forth. In this post I want to focus on a variety of Reformed Baptists currently making waves in both the Reformed and Baptist worlds. This current iteration of Baptists has certain emerging spokespersons, namely people like: Matthew Barrett, Craig Carter, and others within this tribal ilk. It is as if these folk have just realized that Christianity has a history, and that part of that history entails the theological developments present in mediaeval and Post Reformed orthodox theology. It’s as if they just heard of Thomas Aquinas, and that upon this first hearing they have felt something like Luther’s lightning strike along the dark and dreary road of the normally rationalistic Baptisticism they have been coddled in, heretofore, all their live long days. As such, they seem intent on recovering Thomas Aquinas, and Thomist theology in general, in ways that even standing on the rooftops and shouting with glee isn’t enough to atone for their past oversight of the Angelic doctor’s theological speculations. And so they do podcasts, tweet tweets ad nauseum, produce podcasts, publish blog posts, and author books declaring the beauty and bounty they believe they have found in the sacrosanctity, the purist of orthodoxies, in the theology of Thomas Aquinas, and its various iterations within the broad category of the contrivances of Thomism. In their glee, in their newfound faith, so to speak, it’s as if for them the whole classical tradition (so-called) is one big smashed-potato that is of apiece. In this glee they press all of classical theology, whether it be Athanasius’ patristic theology, or Thomas Aquinas’ (Aristotelian) mediaeval theology, together in a way that the unbeknownst reader would think that the continuum of Christian thought just is one big consensus fidelium, one big consensus patrum, one big Great Tradition that Baptists, among all Christians, need to avail themselves of; particularly against the modern theology they have been ensnared by for so long.

But as those who have read here for any amount of time, we know that Thomism is not the same as Athanasianism, or more broadly, Nicene theology. I have detailed in hundreds of posts over the decades how classical theology isn’t without significant nuance, both at formal and material levels. And yet Barrett, Carter et al. simply want to lead people to 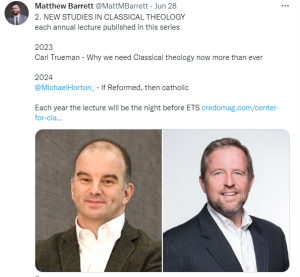 believe that the classical tradition just is of an organic piece that consummates in something like Post Reformed orthodox theology (minus the Federal theology and Covenantal baptism therein). They are creating centers to promote this facile understanding of things; facile in the sense that their thesis simply does not work in regard to the lack of nuance they think the history of Christian ideas from.

The most troubling aspect of all of this is that ideas have consequences, no matter what their historical aperture. And yet these fellas gloss right past these things. They often do so by setting up their respective recovery of Thomas over against the “demonic theology” of the moderns (they include Karl Barth and Thomas Torrance in this frame). And yet those they are leading into the harrowed waters of the ostensibly deep drink of Thomist theology have seemingly never stopped to consider whether or not what they are being tapped with has any necessary correlation to God’s Self-revelation in Jesus Christ, as attested to in Holy Scripture. They are simply told (by people like Barrett and Carter) that in fact Thomas and his heritage in the Reformed expression just is biblically fragrant and correlative. These students are told that Thomas and his speculative theological tradition, particularly as that takes on Protestant dress, is the most proximate interpretive grammar for the biblical teaching that a Christian can live and think from. They are simply told that thinking God as actus purus (‘pure being’) just is the only way an orthodox Christian can think God; and then all the subsequent theologizing that follows as that implicates things like anthropology, soteriology, so on and so forth. And yet I’m here to tell these same people that this approach, this repristinational effort by folks like Barrett and Carter (et al.) is misguided (even if done from good intentions). Who we think God to be will determine everything else following; get God wrong, and you get everything else wrong.

I will be writing on this more, although I feel like I’ve already done that online since 2005, without ceasing. But we now have a new crop, new energy in this arena; they need a

counter voice online: send me Lord! There are others who I didn’t name who are central to this movement. You’ll see their names in the tweets I’m sharing as infographics as Barrett has shared them on his Twitter account (which he blocked me from seeing). People like Carl Trueman, Michael Horton, David Sytsma, Adonis Vidu et al. My intention, as I call these things out, isn’t to troll, but to alert folks to the fact that there is a better way forward to be genuinely and historically evangelical. That there is a kerygmatic, an evangelical, a Christologically concentrated, a theistically personalist and thus truly trinitarian grammatical way to be a Christian that does not simply repose in the repristination of a so-called classical theological universe conditioned by Thomas Aquinas, and his mentor, Aristotle.