The Gospels of the New Testament witness all present Jesus via His historicity, and the facts of His life as they unfolded in particular frames of reference. John the evangelist ended his Gospel with the quip, “And there are also many other things that Jesus did, which if they were written one by one, I suppose that even the world itself could not contain the 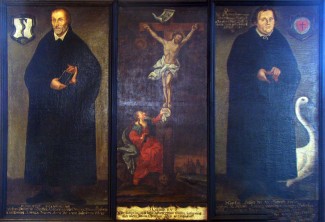 books that would be written. Amen.” Clearly, Jesus was a historical personage, but this is not how the Christian has come to know Him at a first order; nor is it the way that the Evangelists of the Gospels present Him. They, all along the way, were hard pressed to see past the ‘veil,’ so to speak, of Christ’s humanity; indeed, His “historicity,” His “flesh-and-blood-ness” made Him so vulnerable to be mis-taken, that His disciples themselves mis-took Him for most of their time with Him. There were those rare moments, Matthew 16, and Peter’s confession, and Matthew 17, the Mount of Transfiguration, come to mind, where they seemed to be ‘getting it,’ but then His kenotic flesh hid His glorified personhood from them once again. It wasn’t until after the Spirit came, who Jesus said would bear witness to Him, and teach them many things (cf. Jn 14—16; 20 etc.), about just who and what Jesus was, and remains as the Son of David and the eternal Logos. The Spirit taught the Evangelists that Jesus, in His person, is the Deus absconditus (hidden God) who is Deus revelatus (revealed God). In other words, the Evangelists’ offer a depth-dimensional interpretation of who Jesus is and what He is about in regard to the eternal purposes of God made historical and concrete in the particularity of the scandal of God’s cross.

Thomas Torrance offers a profound word on this reality, in regard to the “Jesus of faith” as that relates to the “Jesus of history.” He points out that to know the Christ, for the Christian, is to first know the Son of God made human (and thus historical) for us. He presses the notion that when we are confronted with Jesus, we are confronted with a way to think both history and eternity together, but to think it from the eternity of God for the world such that that eternity is freely shaped by His election to be God with us (Immanuel) rather than against us. Torrance writes:

All this means that any Christological approach that starts from the man Jesus, from the historical Jesus, and tries to pass over to God, and so to link human nature to God, is utterly impossible. In fact it is essentially a wrong act: for it runs directly counter to God’s act of grace which has joined God to humanity in Christ. All Attempts to understand Jesus Christ by starting off with the historical Jesus utterly fail; they are unable to pass over from man to God and moreover to pass man to God in such a way as not to leave man behind all together, and in so doing they deny the humanity of Jesus. Thus though Ebionite christologies all seek to go from the historical Jesus to God, they can make that movement only by denying the humanity of Jesus, that is by cutting off their starting point, and so they reveal themselves as illusion, and the possibility of going from man to God is revealed as likewise illusory.

No, it is quite clear that unless we are to falsify the facts from the very start, we must face with utter and candid honesty the New Testament presentation of Christ to us, not as a purely historical figure, nor as a purely transcendental theophany, but as God and man. Only if we start from that duality in which God himself has already joined God and man, can we think God and humanity together, can we pass from man to God and from God to man, and all the time be strictly scientific in allowing ourselves to be determined by the nature of the object.[1]

Interestingly, it isn’t just the Reformed, like Torrance who thinks this way about the approach of the Christian vis-à-vis the Christological reality as that relates to a knowledge of God, and thus everything. Both Martin Luther and Philip Melanchthon, as Eberhard Juengal identifies, offer similar thinking with reference to thinking God in Christ not purely as a datum of history, but a dandum of God’s free gift of Himself for the world. Luther writes:

He gives utterance not only to things [res], but also to the use [usus] which things are to be put to. For many preach Christ, but in such a way that they neither recognize nor express his ways and his miracles . . .  as do most of those preachers who only preach the stories of Christ, when they are preaching at their best. But it is not Christian preaching when you preach Christ only from a historical point of view; that is no proclaiming the glory of God. But this is: when you teach that Christ’s story refers to its usefulness for us as believers unto righteousness and salvation. That is [then], that he accomplished all not for himself, but for us by the will of God the Father, so that we may know that everything that is in Christ belongs to us.[2]

The connection between what Luther is getting at and Torrance isn’t one-for-one, but the basic premise between the two is significant. The point: that attempting to think Jesus Christ from a purely historicist angle simply fails precisely because of who Jesus is, and thus remains to be for us. He isn’t a relic of history, He was never history’s accident, instead He is the risen Christ who has kerygmatic thrust, evangelical power for us now; ‘if this be not true we are of most people to be pitied.’

Melanchthon, Luther’s colleague, writes something very similar, in spirit, to both Luther and Torrance:

Thus the faith which makes us pious and righteous in the eyes of God is not just this, that I know the history, how Christ was born, suffered (the devils know this too); no, faith is the certainty or the sure, strong trust in the heart that with my whole heart I take God’s promises to be sure and true, by which are offered to me without any merit of mine forgiveness of sins, grace and full salvation through Christ the Mediator. And so that no-one can say it is simply a matter of knowing history, I will add: faith is this, that my whole heart accepts that same treasure. This is not my doing, nor my gift or offering, not my work or preparation. It is [simply] that a heart takes for its consolation and trusts in the fact that God grants and gives to us, not we to him, that he pours all the riches of grace upon us in Christ.[3]

We are visiting different contexts, at least with reference to Torrance in juxtaposition with Luther and Melanchthon, but the main premise is present in all three: viz. that to know Christ is to not to know a relic of religious history and phenomena, but to know Christ is to know Him presently in our midst, as the ground of our life and being in all things.

It is this ‘Christological confessionalism’ that has always attended the liveliness of the Church’s vitality in the world. Insofar that the Christus praesens (to riff a phrase) is not the reality; insofar that the risen Christ is merely thought of in ‘secular’ or profane terms, this is where the Church ceases being the Church, and instead slips into being another social club in the culture writ large. When Christological concentration is not the focus of the Church’s teaching and theologians, when her disciples fall into a following of a Christ of history, without first understanding that He is the Christ of God’s faith for us, it is at this point that the Church becomes just one more platitude of human self-projection; it is at this point that the Church becomes an idol wherein its people come to see their reflection as their idol’s, a christ of an abstract and desolate history. In order for the liveliness of the Church to be always present, she must repose in the strong reality that Jesus Christ is indeed risen, present, and active as the eternally present for us Theanthropos, Godman.

We would do well to follow the leads of Torrance, Luther, and Melanchthon in their respective Christological concentrations. In the end, the Eschaton, the Christian, if they hadn’t prior, will come to recognize that this is the focus that dominates all of heaven, and at that point the entirety of all creation, including the rocks, will cry out that Jesus is King!

3 thoughts on “The Lutheran Connection with TF Torrance: The Kerygmatic Christ as the Concentration”